Buddhist teachers have identified nine levels we all go through when learning to meditate. Some levels will take longer than others, but we cannot skip any of them.

When we start our path in Buddhist Meditation, it is important to understand it is not a race against the clock and there are no stipulated times to complete the levels in Buddhist meditation.

There are several pictures which depict the road to realization. The visual representation of the nine levels of Buddhist Meditation consists of a monk traveling a road. On the road, there are an elephant and a mysterious monkey. 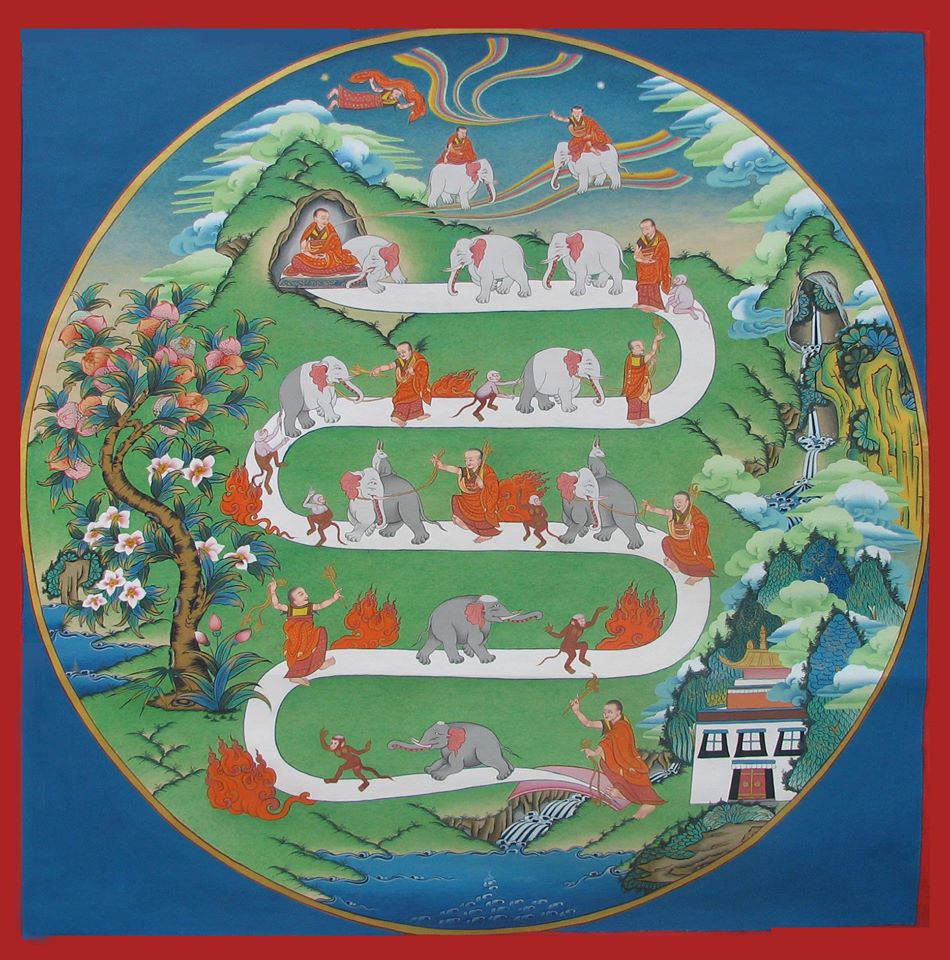 It comprehends an ascending, continuous road without stops or checkpoints. The road is obviously the path you must go through in your quest for mental peace. The road is continuous, meaning there is not a point where you can distinguish when one level is over and the next starts.

There is a river flowing from the top of the image, which is born in the snow mountains reaching the bottom of the picture. The goal is to reach the origin of the river through meditation. As you ascend, you can look down and understand the river flows down from where you are. When you reach higher levels, you will see where the river originates.

The elephant represents your mind. At first, the elephant is out of control and running. It does what it wants. The monk starts his path trying to catch the elephant, but at first, he cannot catch up with the elephant’s pace.

In the beginning, the elephant is completely black. It lacks light. The mind is out of control. It falls into negative, dark thoughts.

With every turn of the road and little by little the elephant begins to turn white starting with the crown of the head. It represents the light that starts entering our minds thanks to meditation.

The monk has a rope in one hand and a staff in the other. The rope serves to control the elephant and lead it along the way.

For the first two levels, the monk carries the staff closest to the elephant. It means we will need to apply some “hard hand” to get control over our minds. It will require determination and continuously undergo the Buddhist Meditation road.

During the first four levels of Buddhist meditation, the monkey guides the elephant. The monkey, as the elephant, starts the road being completely dark, turning white from the head down with every level of Buddhist Meditation achieved. But the Monkey mysteriously disappears when it turns completely white!

We can explain what the Monkey Mind is with this example:

“The monkey is in the woods. From a tree, it turns its head, looking for something. Suddenly its eyes light up and, resolutely, it jumps. It takes another branch. It is calm and happy to have reached the new tree, but it doesn’t last. It is still missing something. Probably the monkey wants more sun or there is not enough fruit. It could be resolved in the next tree, so the monkey repeats the ritual and jumps again. For five seconds, the monkey feels calm, until it realizes this dreamed place was not what it seemed. The monkey, once again, turns its head searching for something.”

Your worst enemy is the monkey that lives inside you.

At the top of the picture, the white road ends and turns into a rainbow.

The rainbow represents happiness. At the end of the road, you start walking on that rainbow. When the monk reaches the rainbow, he climbs on the elephant. Now the elephant goes exactly where the monk wants.